You want a “chase camera” that can follow your car (or any other object).

Godot has a built-in InterpolatedCamera node that does most of what’s described here. However, we’re not going to use it for two reasons: first, it has a tendency to stutter when following kinematic bodies, and second, it’s getting removed in Godot 4.0. Setting up our own is really easy though, so don’t worry.

Setting up the camera

Add a new scene with a Camera. Name it ChaseCamera, save it, and add a script.

The ChaseCamera will have a target - the thing it’s following. We’re also going to include the ability to change that target.

The only parameter to set here is the lerp_speed, which controls how quickly the camera updates its position. Set it low, and the camera will “lag” behind the car. Set it high, and it will remain locked on.

Setting up the target(s)

We want to be able to have a few different chase camera positions. One close and one far, for example, or perhaps one looking straight down. Add a Spatial to the car and name it CameraPositions. Add a few Position3Ds to this - as many as you would like.

Move and orient each Position3D in a different location of your choosing. The position’s -Z axis should point at the car.

You may find it helpful to temporarily attach a Camera to the position and use its “Preview” mode to help aim the Position3D so that it’s pointing directly where you want (you can remove the camera once you’re done). 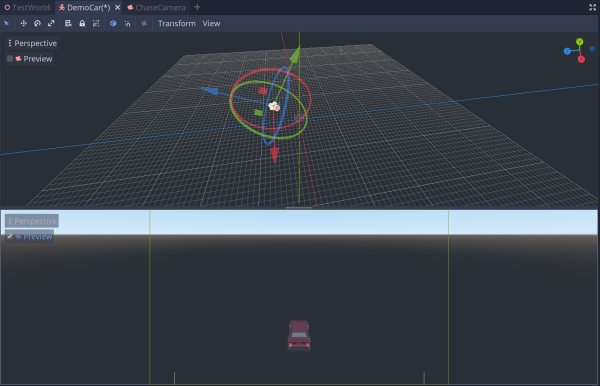 To communicate to the camera, we’ll emit a signal whenever we want it to change position. Add the following code to the car’s script:

Add an action in the InputMap for changing the camera. Here, we’re using Tab and the right shoulder button:

Add a ChaseCamera instance to your main scene and set it Current. Then connect the car’s change_camera signal to the camera’s _on_change_camera() function.

Run the game and press the camera change button to try it out: