You want your AI-controlled entity to switch between different behaviors.

For this example, we’ll assume an enemy with the following behaviors. See the individual recipes for how to make each behavior work.

These behaviors are states - the enemy can only be in one of these states at a time, and certain events, such as the player getting near, will cause a transition to another state.

To determine the state transitions, we have two Area2D nodes on the enemy: an outer one called “DetectRadius” and an inner called “AttackRadius”. The player entering or exiting these areas will trigger the related behavior. 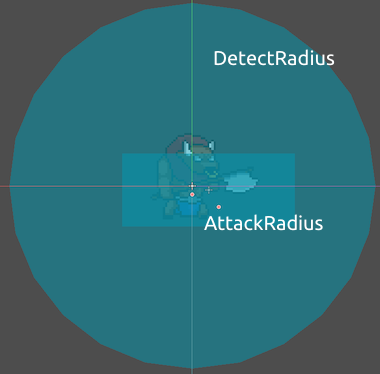 We’ve chosen a rectangular shape for AttackRadius in this example due to the shape of the enemy’s attack. Any shape is fine as long as it’s smaller than the DetectRadius.

Connect the body_entered and body_exited signals of both these areas. If you’re using collision layers (and you should be), set them so that they can only detect the player (or any other body you want to be chased/attacked).

We start with an enum to give us a way to reference our states by name, and a variable to hold the current state.

The other variables needed for the individual behaviors and animations. See the referenced behavior links above for details.

We’ll handle movement as normal in _physics_process(), calling choose_action() (see below) to decide what the resulting movement will be.

In choose_action() we determine the target and move toward it.

Finally, the functions connected to the area signals change the state accordingly.

This example is intentionally kept as simplified as possible, while still demonstrating complete behaviors. In a larger project, there would likely be a greater number of behaviors, as well as more complex conditions for deciding which one to apply.