You’re looking for a way to handle data and/or create flexible data objects in your game.

Godot’s Resource class is a powerful tool for storing and working with data. Many of the most common objects you work with in Godot extend the Resource type: animations, collision shapes, images, etc. Resources not only contain data, but can also manipulate that data (if you’re familiar with the concept of scriptable objects in Unity, the concept is similar).

In addition to all of Godot’s built-in Resource types, you can create your own custom resources to handle your own game data. This has the benefit of abstracting and encapsulating data - creating something that can be used by any other object in your game.

For this example, we’ll take the concept of player health in a platformer game. A lot of game systems interact with the player’s health. For example:

In addition, there may be other interactions: maybe the game’s soundtrack changes as the player’s health gets low, or enemy behavior changes based on the player’s status.

This is an intentionally simplified example. In practice, you’ll probably need more functionality than we use here, or you’ll want to modify the example to fit with your game’s architecture.

First, we need to define our new custom resource, which we’ll call PlayerHealth. This resource needs to keep track of properties related to health. It also provides some functionality and signals to handle the changing of the health amount (such as healing and taking damage).

In the Script tab, choose File>New Script. Make sure it inherits Resource and name it PlayerHealth.gd.

Let’s break it down piece-by-piece:

At the top we have our extends line and the class_name we’re assigning to the resource. This name will appear in various places in the editor.

Next we have a signal that game objects can subscribe to if they need to know when the player’s health changes. You could also add additional signals for the health reaching zero, etc.

These are the properties we’ll be using.

This function lets us initialize the health to the max value. You might do this at game restart or when starting a new level.

This function should be called whenever damage is dealt to the player.

This function should be called whenever the player needs to be healed.

Once the PlayerHealth class is defined, we can make a new instance of it. Click the “New Resource” button at the top of the Inspector:

In the “Create New Resource” dialog you’ll see the long list of resource types. Searching will locate our PlayerHealth type.

Now you can set the desired max_value and save the new resource as a .tres file. 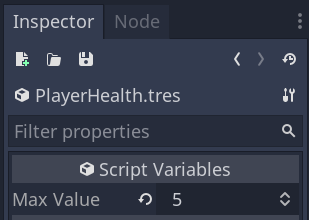 Once the resource has been created and saved, we’re ready to use it. Once again, in this scenario we have the following objects:

We won’t include all of the code for the game, just the parts that pertain to the health resource.

On the player, we export a variable to attach the resource via the Inspector. As part of the player’s movement code, it calls hurt() when the player runs into spikes.

The heal zone (an Area2D), affects anything inside it that has a health property:

Finally, for the UI to display the health, we attach the same health resource and connect to its health_changed signal:

Here’s an example of it in action: