In the last part, we learned about transforms, a very important concept in 3D that records an object’s local orientation in space, and used it to move our KinematicBody character. This time, we’re going to look at another type of 3D node: the Area.

Area nodes are used for detection and influence. They can detect when objects overlap, and when an object enters or exits a region. An Area can also be used to override physics properties, such as gravity or damping, in a region.

We’re going to use Area to create three types of objects:

To begin, let’s set up some collision layers so that we can more easily control what objects the areas can interact with. Open the Project Settings and find the “Layer Names/3D Physics” section. Name the first three layers “environment”, “player”, and “pickups”. 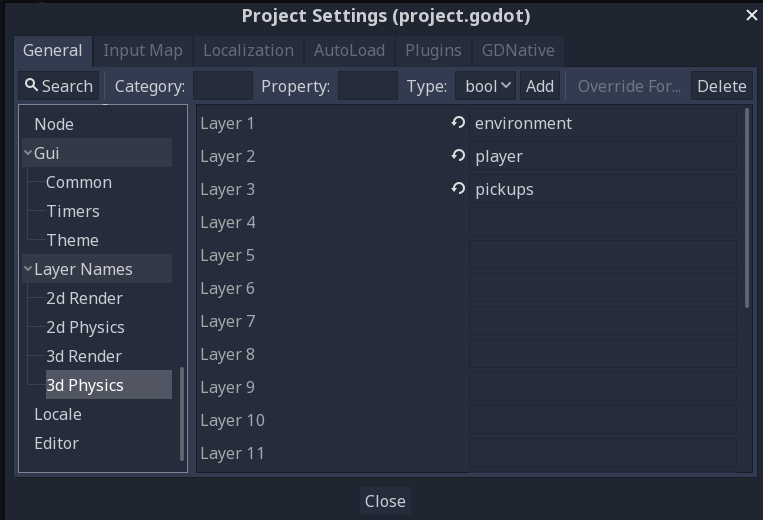 Create a new inherited scene from the CoinGold.glb object in the Kenney Platformer Kit (see Part 03). Right-click on the root node, choose “Change Type”, and pick Area. In the Inspector, set the collision mask and layer so that the coin is in “pickups” and scans “player”. 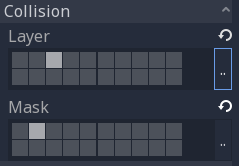 Now we need a collision shape, so add a CollisionShape node and choose a CylinderShape for it. If you rotate it 90 degrees around z, it will fit the coin shape pretty well. 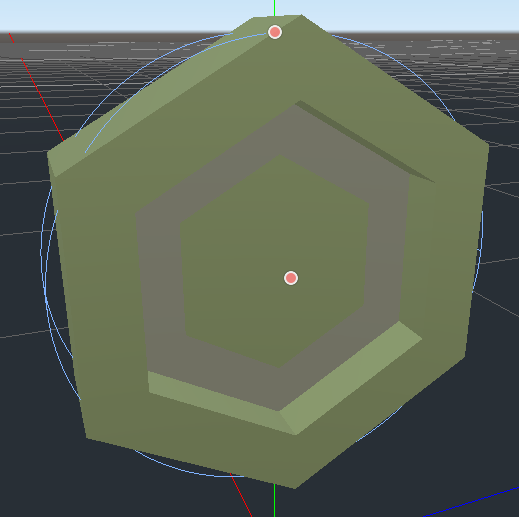 Add a script to the Area and connect its body_entered signal, which we’ll use to remove the coin:

Add a few coins to your scene and see if you can pick them up:

Make a new scene with an Area root, and name it “Bullet”. Add a MeshInstance, a CollisionShape, and a Timer. I’m using a sphere shape for the mesh and collision, scaled to a radius of 0.2 so that it won’t be too big compared with the character. The Timer is to give the bullet a time limit. Set its One Shot and Autostart properties both on.

Add a script and connect the Timer’s timeout signal and the Area’s body_entered signal. Then add the following:

Since we want the bullet to start at a certain location and travel directly ahead of the player, we’ll pass the player’s transform to start() and use it to orient the bullet and make it move forward (remember in Godot’s orientation, “forward” is along the negative z axis).

Finally, we’re going to add some danger to the environment. Make in instance of the spikes.glb object and make it an Area like we did with the coin. Add a script and connect the body_entered signal, but this time, we want the object to do something to the character:

Now we need to define how the character reacts to taking “damage”. Since we haven’t really built a health system, we’re just going to “bounce” the character as if it got hurt. We need to add the following to the character script:

The purpose of this code is to disable input temporarily so the player will fly backwards from the spikes. If we just tried to set the velocity, it would immediately be overridden by the velocity set by the key inputs. So add this at the beginning of get_input():

Add a spike instance to your level and try it out:

In this tutorial you learned how to use Area nodes to detect and react to 3D bodies.

In the next part: a collection of small improvements.